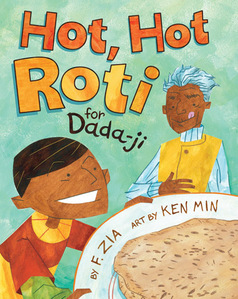 Synopsis
Hot, Hot Roti for Dada-ji is a whimsical story of a young Indian American boy’s adventures with his grandfather. When Aneel’s grandparents come to stay with his family it means good times and great stories are ahead. After his grandfather, Dada-ji, tells a story about his childhood, Aneel is inspired to cook up some fun of his own. Learning that hot roti, an Indian bread, used to make his grandfather as strong as an ox, Aneel decides to see if the bread still has the same power. Under the watch of the whole family, Aneel makes up a batch of hot, hot roti, and it seems his grandfather couldn’t be more excited. But, when there are no water buffaloes to wrestle or mango trees to shake, like Dada-ji does in his stories, the two set out to find other adventures.

Background
Hot, Hot Roti introduces students to the culture and traditions of India. The author weaves together many aspects of life in India and contemporary life in the United States.

Indian Americans, usually referred to as Asian Indians to avoid confusion with Native Americans, who were traditionally called American Indians, are one of the fastest growing immigrant groups in the United States. According to the 2010 Census, cities with sizeable Asian Indian communities include the New York City area, Jersey City, Atlanta, Baltimore/Washington, Boston, Chicago, Dallas/Ft. Worth, Detroit, Houston, Los Angeles, Philadelphia, and San Francisco/San Jose/Oakland.

Second in population only to China, India is home to around 900 million people. The two major religions are Hinduism (about 82 percent of the people) and Islam (approximately 12 percent of the people). The official languages of India are English and Hindi, although hundreds of dialects are also spoken. The capital is New Delhi in the northern part of the country. India has been an independent democratic country since 1947 and today is fast becoming a global economy.

Roti is a soft, round, flat unleavened (meaning it does not use yeast) bread made from whole wheat flour that is traditionally eaten in India, Pakistan, Bangladesh, Nepal, and Sri Lanka. (It is also eaten in parts of the southern Caribbean, particularly Trinidad and Tobago.)

Before reading, introduce students to the glossary on the last page of the book. Hindi words and phrases used throughout the story are defined there, along with pronunciations.

Before Reading
Prereading Focus Questions
Before introducing the book to students, you may wish to develop background, tap prior knowledge, and promote anticipation with questions such as the following:

Exploring the Book
Display the book and write the title on the chalkboard. Read the title aloud and ask students to speculate about what the title means. Encourage students to study the front cover illustration for context clues.

Have students look through the book and note the expressions on the faces in the illustrations. Explain that these expressions help tell the story.

If you have not already done so, introduce students to the glossary on the last page of the book and review the words and phrases so that students will be familiar with them during the reading.

Setting a Purpose for Reading
Have students read to learn about Aneel’s relationship with his grandfather and what motivates Aneel throughout the story.

Vocabulary
Have students work in small groups to create a list of twenty words—ten words that describe Aneel and ten that describe Dada-ji. Students may choose words from the story or come up with their own words to describe the characters.

After Reading
Discussion Questions
After students have read the book, use these or similar questions to generate discussion, enhance comprehension, and develop understanding of the content. Encourage students to refer back to the text and illustrations in the book to support their responses.

Social Studies
1. Have students research India and its culture. One place to start online is the CIA World Factbook. Let individual or small groups of students choose specific topics and present what they learn in an appropriate format, such as a short essay, chart, graph, map, and so on.

2. Provide each student with an outline map of the world on which countries are indicated (many reproducible maps can be found online). Have students chart a course from the United States to India with four or five stops along the way. See where they imagine themselves going! Let volunteers tell why they stopped at each place.

3. Have each student bring in a recipe that has special cultural, religious, or holiday significance to her or his family. On the back of the recipe have the student write the “story” behind the recipe. Ask students to give a presentation about their recipes and then create a class recipe book than can be duplicated and sent home with each student.

Language Arts
Have students write fictional stories about the special powers their favorite foods can give them. This activity may be done by individuals, small groups, or as a full class writing experience.

Math
Download the roti recipe from the Hot, Hot Roti website, and duplicate enough copies to distribute to the class. Have students practice working with equivalent measurements by halving and doubling the ingredients. Then ask students to guess how many roti they think they can make from the amounts of ingredients listed in the original recipe. Make a note of student’s guesses if you plan to make roti in the classroom. (see Science/Cooking activity)

Science/Cooking
If possible, have students cook up a batch of roti in the classroom. Use the roti recipe downloaded for the Math activity. Have students note the changes that occur in the ingredients when they are mixed together, and the changes in the dough as the roti cook. After all the roti are cooked, count up how many there are and compare that number to students’ estimates. Then enjoy a delicious snack!

Music
Introduce students to Indian music through some of the recordings made by Ravi Shankar, composer and sitar player. His recordings are readily available and he has worked in a variety of traditional Eastern and Western styles. Have students compare the music on Shankar’s recordings to other music with which they are familiar.

Indian pop music is also becoming more popular. Students may enjoy listening to a recording of the song “Jai ho,” which was composed by A. R. Rahman for the 2008 movie Slumdog Millionaire. Recordings of this song are also easy to find online.

About the Author
F. Zia is a writer and an elementary school teacher who grew up in Hyderabad, India. Her stories blend humor and tradition, memories and contemporary moments. Zia, who believes writing—like roti making—requires persistence and practice, wrote this story as a gift to her grandchildren. Zia lives in eastern Massachusetts with her husband. This is her first picture book.

About the Illustrator
Ken Min is an illustrator and animation storyboard artist. As a boy in Los Angeles, Min dreamed of becoming a dinosaur doctor. After realizing that dinosaurs were extinct, he decided to pursue his love of art. Min still lives in California and enjoys drawing the animals at the San Diego Zoo. This is the first picture book he has illustrated.