Irena's Jars of Secrets is a picture book biography of Irena Sendler, a Catholic social worker in Poland during World War II who rescued hundreds of Jewish children from the Warsaw ghetto. In this BookTalk, author Marcia Vaughan and illustrator Ron Mazellan discuss the process of creating historical fiction and what it means to be courageous.

Irena's Jars of Secrets is a moving historical story about the realities of World War II and the Holocaust. Does the Holocaust have any personal significance to you? How did Irena Sendler’s story influence you?

Marcia Vaughan: Irena Sendler’s story opened my eyes to the brave deeds done by ordinary people with extraordinary courage. People such as Irena Sendler faced death every day so that others might live.

As a child I only knew one person, my father’s good friend Earl Mamlock, who spent time in a concentration camp. Mr. Mamlock was shot down in a plane over Nazi Germany. He told stories of the harsh living conditions and of surviving on small rations of food including something called “blood sausage.” I didn’t know what that was, but it sounded awful! 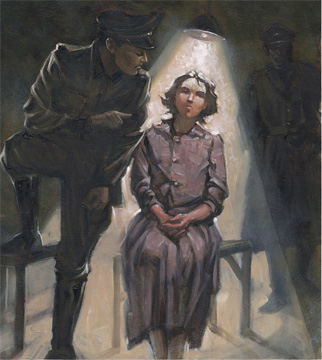 Ron Mazellan: Several years ago I illustrated a similar book entitled The Harmonica, which dealt with the Holocaust as well. It was extremely difficult in terms of research but it changed me as a person and as an illustrator.

Irena’s story has moved me in the same way. In the middle of the darkest moments, good rises. Irena represents the good that is possible when we choose to make a difference. This book represented that to me, and it was an easy choice to be a part of the journey to create the illustrations for such a powerful story.

Marcia, why do you feel Irena Sendler's story is important to share with children? How can her story help young readers understand the scope of the Holocaust?

MV: Sadly, war is still a part of life for children in many parts of the world today, and we see scenes of violence on television news nightly. I feel it’s important for young readers to know that while the world is not a perfect place, there are good-hearted people everywhere working to bring peaceful solutions and aid to troubled areas.

Some children reading the story may be surprised to learn about the atrocities of World War II. Marcia, do you feel that it’s important for people to learn about war from a young age? How did you balance writing about such a heavy subject matter with the age of your intended audience?

MV: Even for adults the Holocaust is difficult to understand. Focusing on one individual makes this slice of history more personal. Learning about what Irena Sendler and her network of rescuers accomplished can help children better understand what everyday people throughout war-torn Europe were trying to achieve as they rebelled against Hitler and his forces.

Ron, reviewers have called the illustrations “shadowy and impressionistic.” What led you to illustrate the story in this way?

RM: Choosing the color palette is always a decision that takes time and deep thought. The mood and mystery through word and story directed the narrative use of color. The color hopefully has a visual language, complimenting the difficulty of the events. 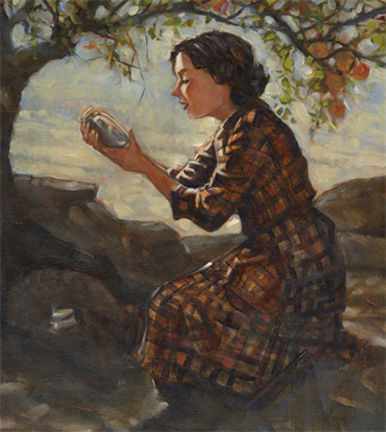 Ron, what is it like to work on a historical fiction picture book? What kind of research did you do while working on the book?

RM: The research is critical at all levels. The more you do, the more it informs you of the time, the events, the people, and the hardships. It can overwhelm you emotionally, which it should, but it creates the necessary ingredient of empathy. As a result, the process makes you feel deeply, which fosters an empathetic connection to the story.

When learning more about Irena’s life, was there anything you came across that really surprised you? Marcia, are there any interesting facts you learned that didn’t make it into the book?

MV: I first learned of Irena Sendler while watching the Today show one morning several years ago. I was amazed by how many children she and her network of co-conspirators rescued from the Warsaw Ghetto during World War II. I knew young readers would also be amazed at the ingenious ways the children were smuggled to safety.

RM: What surprised me most was Irena’s courage and how little I knew about such an extraordinary person.

Irena was a true role model. Ron, what other role models, living or dead, do you look up to or wish more people knew about?

What do you want readers to take away from Irena’s story?

MV: In Irena's Jars of Secrets I tried to tell Irena’s story with respect and honesty even though many parts are difficult and painful. From reading this book I hope children become aware that even one person can make a huge difference in the world.

RM: It is my desire that Irena's Jars of Secrets will instill hope and courage into the lives of readers. A more direct outcome is a prompting through Irena’s life of parents and children to do good and offer kindness to others no matter how bleak or difficult an experience might be.

Are there any upcoming projects that you are excited about?

RM: Any time I get to create and paint is exciting. Presently I am working with Brown Publishing on several short stories.