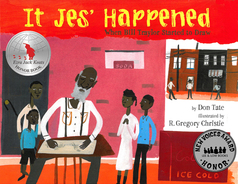 In understated prose, Tate imagines the wellspring of memories that might have contributed to Traylor’s outpouring of art so late in life: jumping in the Alabama River as a child, witnessing the Civil War and its aftermath, and caring for animals on the farm where he lived after emancipation: “Bill saved up these memories deep inside.” After the death of his wife, Traylor moved into Montgomery, where, homeless, he began drawing on sidewalks and assorted objects. Soon after, an artist named Charles Shannon took an interest in his work, arranging for an exhibit of Traylor’s work. Christie’s acrylic and gouache illustrations nod toward Traylor’s own style, with bold color blocks and naïf figures, in this thoughtful reflection on the nature of creative inspiration and a man who “has come to be regarded as one of the most important self-taught American folk artists.