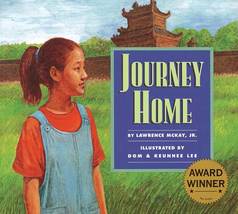 Synopsis
Ten-year-old Mai describes returning to Vietnam with her mother to seek out her mother’s birth family. Mai’s mother, although brought up in the United States by an American family, was left as a baby in an orphanage during the Vietnam War. Before leaving on their journey, Mai and her mother read about the country, and Mai is especially interested in the stories of Kuan Yin, the Goddess of Mercy, who is believed to remove sorrow when a cry of misery is heard. Taking along a photograph of Mom as a two-year-old holding a kite, Mai and her mother visit the People’s Hall of Records and many orphanages, but no one recognizes the picture. Finally, in a marketplace, they see a kite like the one in the photo and learn the name of the kite maker and the city where he sells his wares. The kite maker recognizes the photo and tells Mom her story and her Vietnamese name. Mom’s parents died in the bombing during the war, and the kite maker, a friend and student of Mom’s father, brought her to an orphanage for safekeeping. As they visit the shrine where the ashes of Mom’s parents are kept, Mai silently thanks Kuan Yin and contemplates where home really is.

Background
Vietnam is an S-shaped country in Southeast Asia. Most people in this tropical land live in coastal villages or on river deltas. Farming and fishing are two mainstays of Vietnam’s economy, and rice is its chief crop.

France took control of Vietnam in the 1800s and governed the country as three separate parts of French Indochina. During WW II, the Japanese took over the country until their defeat in 1945. At this time, a Vietnamese Communist, Ho Chi Minh, became the leader of the Viet Minh, an organization supporting independence. Although the French returned and re-established control in the south, they could not put down the Viet Minh resistance. As a result, the Indochina War began in 1946. When the French were defeated in 1954, the country was divided into North Vietnam led by Ho Chi Minh and South Vietnam led by Ngo Dinh Diem. By 1957, Communist rebels in the south known as Viet Cong began to revolt against the South Vietnamese government, leading to the Vietnam War.

United States’ involvement in Vietnam was based on a policy of helping nations threatened by Communism as well as to retain its credibility with other nations who depended on the United States’ help to resist Communism. At first the U.S. role in South Vietnam consisted of civilian and military advisers, but by 1965, it included ground combat troops and bombing. Conflicts escalated and subsided many times over the following years, but by the end of 1973, few U.S. troops and military personnel were left in South Vietnam. Fighting between North Vietnam and South Vietnam continued until 1975, when South Vietnam surrendered after a full-scale invasion by the North Vietnamese. In 1976, the country was officially unified under a Communist government. Economic deprivation and harsh government relocation and “reeducation” policies led much of the population of South Vietnam to become refugees seeking escape. About one million people fled, often in small boats. Many eventually came to the United States.

Setting a Purpose for Reading
Invite students to read the title aloud and elicit comments on the meaning of the title. Then focus on the front and back cover illustrations. Where do you think the girl on the front cover is? Why is she there? How would you describe her expression? What is shown on the back cover? How might this picture be related to the one on the front?

Turn to the title page and ask students to study the picture. Suggest that students write down their ideas about who is shown in the picture, where it was taken, what the child is holding, and how this picture relates to the one on the front cover. Ask students to keep their ideas in mind as they read the book to see if their predictions were correct.

Vocabulary
Write the following words from the book on the chalkboard or a word wall.

Assign each word to a small group of students. Explain that each group will present its word to the class on a given day, and encourage them to think of new or creative ways to do this. Students may want to think of interesting sentences that illustrate the meaning of the word in the story, tell the word’s history and/or derivation, make up a song or poem using the word, and so on.

After Reading
Discussion Questions
After students have read the book, use these or similar questions to generate discussion, enhance comprehension, and develop appreciation. Encourage students to refer back to the book to support their responses.

Reader's Response
Use the following questions or similar ones to help students practice active reading and personalize their responses to what they have read. Suggest that students respond in reader’s journals, oral discussion, or drawings.

Language Arts
In the book, it is very important to Mai’s mother that she learn her real name. Explain to students that in Vietnam a person’s family name is given first, and the name equivalent to a first name follows. Invite students to learn more about the origins and meanings of their own names. In addition to consulting family members, students might check books about names or search for information on the Internet. Have students design plaques with their names and a brief explanation of them.

Math
Both Mom’s father and Tran Quang Tai are kite makers. Challenge students to design and make their own kites. Students might make simple kites from folded cardboard or construction paper, or they may choose to research more elaborate kites from crafts books. Be sure to set aside a time for class kite flying.

McKay wanted to be a writer from his childhood days. He wrote haiku in fourth grade and went on to other poetry by sixth grade. Says McKay, “I’ve always loved language.” McKay is also an avid reader who “devours world literature.” In Caravan, a ten-year-old boy accompanies his father on a trip down from the Hindu Kush in Afghanistan to the regional market. As does Journey Home, the story involves the role of family and culture. McKay says, “I have come to believe that human truths are the same for all of us, regardless of race, color or creed. Culture often colors reality, and thus truth can be difficult to recognize, yet sadness is sadness, happiness is happiness, no matter what our ethnicity or culture.”

A native of Pennsylvania, McKay now lives with his wife and children in Vashon Island, Washington. He is an enthusiastic cyclist, hiker, skier, and musician.

About the Illustrator
Dom Lee has illustrated several children’s books in addition to Journey Home, including Passage to Freedom: The Sugihara Story, an American Bookseller "Pick of the Lists," Baseball Saved Us, a Parents’ Choice Award winner, and Heroes, a Smithsonian magazine Notable Book for Children, all written by Ken Mochizuki.

For each title, Lee familiarizes himself with the era in which the story is set, researching both photographs and texts. He then uses a unique illustration process to create pictures that resonate with the mood and period of the story. After applying handmade encaustic beeswax to paper, Lee scratches out the images and then uses oil paint and colored pencils to add color.

Lee is a native of Korea. He received his bachelor’s degree in fine arts from the College of Fine Arts at Seoul National University. He then earned a master’s degree in illustration at the School of Visual Arts in New York City.

Keunhee Lee collaborated with her husband Dom Lee to illustrate Journey Home. She is also a contributing artist to America: My Land, Your Land, Our Land, by W. Nikola-Lisa. Lee has had numerous gallery shows in the United States, Paris, and her native Korea. She presently lives in New Jersey with her husband Dom and their children.