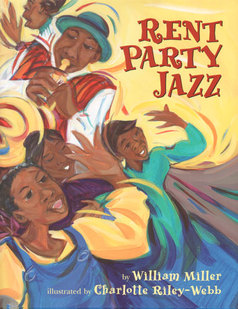 Dignified and joyful illustrations underscore a story of a group of people who find themselves in dire economic straits yet rise above these limitations through their collective creative efforts. In New Orleans of the 1930s, young Sonny Comeaux works for the coal man each morning before school. His work brings him by Jackson Square, where jazz musicians congregate and play for change, sometimes buckets full. When Sonny’s mother loses her job, she insists he not quit school even though they may not be able to pay the rent. Worried, Sonny gravitates to Jackson Square every day after school, especially to Smillinâ€™ Jack, the trumpet player who has played across the country and whose talent is impossible to ignore. On the third day he stays after the crowd has gone and Jack, picking up on Sonny’s blues asks his name. Sonny reveals his troubles and in quick order Jack tells Sonny to organize a rent party, recalling the tradition from his days In Mississippi. The party is a success in ways beyond the money raised. Sonny feels transported by the music and Jack is humbled and invigorated by the good will displayed by the partygoers. Sonny realizes if he had quit school he likely would never have met Smillin’ Jack nor found his new ambition to play trumpet. In her debut, Riley-Webb captures the strength and energy of New Orleans in thick bold swirls of acrylic paint that practically burst from the pages. In an afterword, the author provides a useful explanation of the rent party phenomenon in African American neighborhoods in the first part of the 20th century. Simply terrific.