Synopsis
Growing up a slave in South Carolina, Robert Smalls always dreamed of the moment freedom would be within his grasp. He and his wife, Hannah, made an agreement to save enough money to buy her freedom and that of their baby daughter. However, as the Civil War moved closer to Charleston, Robert saw that freedom might be won not with money, but with an escape.

Because Robert had been trusted as a wheelman of the ships, he knew his way around the waterways, and even knew the secret whistle codes that would allow boats to pass checkpoints. On the night of the planned escape, Robert Smalls stood proudly at the Planter’s wheel. Only seven miles of water lay between the ship in Charleston harbor and freedom in Union territory. With precision and amazing courage, he navigated the Planter past the Confederate forts in the harbor and steered the ship toward the safety of the Union fleet. Just one miscalculation would be deadly, but for Robert, his family, and his crewmates, the risk was worth taking for the chance of freedom. When the ship finally made it to Union territory, Robert raised a white flag and surrendered. He was welcomed as a hero by the Union navy. He had brought his family and crew safely to freedom.

Background
Robert Smalls was born in the slave quarters on the McKee family’s property in Beaufort, South Carolina, in 1939. During and after the Civil War, Smalls was a ship’s pilot, sea captain, and politician. After working as a pilot for the Union, he later became a politician, serving in both the South Carolina State legislature and the United States House of Representatives. Smalls was a driven politician. He authored legislation that created the first free public school system for all children in South Carolina, convinced President Abraham Lincoln to accept African American soldiers into the Union army, and introduced a petition that would give women the right to vote.

Before Reading
Prereading Focus Questions
Before introducing the book to students, you may wish to develop background and promote anticipation with questions such as the following:

Exploring the Book
Write the title and subtitle of the book on the chalkboard. Ask students what they think they mean. What do they think the story is about?

Have students look at the illustration on the front cover and the map on the back cover. Discuss what they notice in the images. How might these images relate to the title/subtitle?

Take students on a book walk and draw attention to the following parts of the book: title page at the beginning and afterword, quotation, author’s sources, dedications, and acknowledgments at the end. Discuss why so much additional information is included.

Setting a Purpose for Reading
Have students read to learn about the story of Robert Smalls. Also encourage students to read the Afterword at the end of the story, to find out more about Robert Smalls.

Vocabulary
Have students use a thesaurus to find synonyms for these words from the story. Then have them work in pairs to create sentences for each word and its synonym. Let students share their sentences and decide as a group if the words are used correctly.

After Reading
Discussion Questions
After students have read the book, use these or similar questions to generate discussion, enhance comprehension, and develop understanding of the content. Encourage students to refer back to the text and photographs in the book to support their responses.

Math
It took Robert Smalls from 3 AM until dawn to travel seven miles in the Planter. First have students look up the time of sunrise on May 13 in Charleston, South Carolina, to determine how long it took Robert’s boat to travel the seven miles and its average miles per hour. Then let students pick a few modes of transportation (for example, walking, bicycling, running, driving in a car, and so on) and figure out how long it would take to travel seven miles at various speeds. The results could be compared on a class graph.

Art
Using the book and other resources that are available, have students create an artistic representation of the Planter. This could take the form of drawings, paintings, a mural, a three-dimensional model, computer-generated images, and so on.

About the Author
Janet Halfmann is the author of more than thirty books for children, including several nonfiction and natural science titles. After researching African American achievements during the Civil War, she was inspired to write about Robert Smalls, “a person who used his talents to help others and make the world a better place.” Halfmann has four grown children and lives with her husband in South Milwaukee, Wisconsin. To find out more about Janet Halfmann, visit her at www.janethalfmannauthor.com

About the Illustrator
Duane Smith is an artist, an illustrator, and a graphic designer with a degree from Pratt Institute in New York City. His wide-ranging works have been featured in periodicals, books, movie storyboards, and galleries. An art instructor for several after-school programs, Smith inspires children to think conceptually and independently. He splits his time between homes in Brooklyn and Albany, New York. Visit him online at his website. 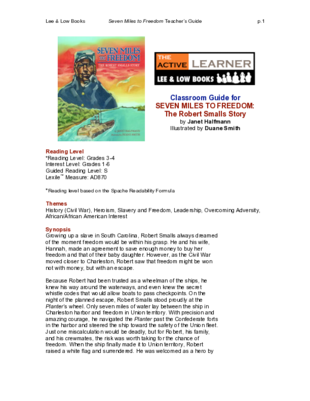