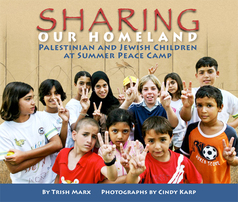 In 2005, author Trish Marx and photographer Cindy Karp traveled to Israel to meet the children at Menashe Summer Peace Camp. The camp experiences and the daily lives of Alya, an Israeli Palestinian girl, and Yuval, an Israeli Jewish boy, became the book Sharing Our Homeland. In this BookTalk, the creators talk about how the book came to happen, their time in Israel, and the Israeli-Palestinian Conflict.

How did you first learn about Peace Camp? What made you decide to create this book together? 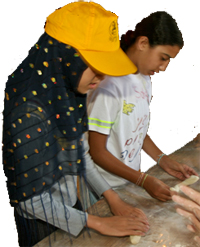 This was an example of friends helping friends! My good friend Mohammad Darawshe, who at the time worked for Givat Haviva, the organization in Israel that sponsors the camp, told me about the camp. Since I loved going to camp as a child, I told my good friend Cindy about it, and she and I packed our bags and headed to Peace Camp. We knew the story of a summer camp where Palestinian and Jewish children got to know one another was a really important topic, and we wanted our readers to experience the camp along with the campers.

How did you meet Alya and Yuval, and how did you decide to focus the book on them?

We met Alya and Yuval the first day we were at camp, which was their first day too. They had wonderful smiles and they both agreed, after talking to the parents, to be in our book.

What are some anecdotes from your trip to Israel and the Palestinian Territories that you weren’t able to include in Sharing Our Homeland?

When we landed at Ben Gurion Airport, we rented a car and drove north to Givat Haviva. The day was sunny and bright and we were in good spirits. Driving through one of the towns on the way, however, we learned that just the day before, a terrorist bomb had gone off on the street we were driving on. It made us think about the campers, and the effect these tragedies have on every person living in Israel.

What were some things that surprised you during your trip?

We weren’t sure people would want to talk to us about their lives and their feelings, but they did. They asked us into their homes, they fed us and gave us wonderful fruit drinks. They took us to places where some difficult and scary things had happened. They asked us about our lives. They became our friends.

What research did you do for the story before traveling to Israel?

We read books and articles about the history of the region. We met with Mohammad when he was in New York City, and introduced him to our editor, Louise May. We told each other that we didn’t know what we would find once we got off the plane in Israel, but that every day would be an adventure and that telling this story about the campers—what they did and how they felt—would make a great story. 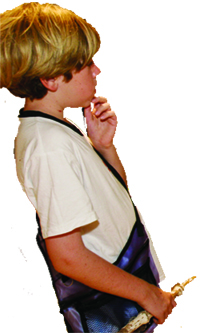 Do you keep in touch with Alya and Yuval?

We are so excited to send books to them! It is a little hard keeping in touch with them by letter or email as we don’t speak Hebrew or Arabic and they don’t speak much English. But I know we could go right back there and it would be like we never left.

Since you don’t speak either Hebrew or Arabic, how did you communicate with the campers?

We had translators who helped us get the story. Also, we read a lot of the materials the people at Givat Haviva gave us that were in English, so we got some background information that way.

The Israeli-Palestinian conflict has been in the news a lot lately, in the wake of Israeli Defense Forces actions against ships trying to reach Gaza. Having visited this area and gotten to know some of its people, what is it like to watch the fluctuations of violence?

It’s very difficult to watch. We know both sides are saddened by these recent events. We know that Alya and Yuval and their families support peaceful co-existence and, by becoming a part of Peace Camp, are working toward this goal in their communities.

Many of the camp activities you describe directly relate to the conflict and to teaching the children about their neighbors, but many others are just about fun. Why do you think the fun activities are important?

Fun, humor, laughter, and creativity are all incredibly important to both kids and adults no matter where they live. These are ways we learn about ourselves, and about others, often without knowing we are learning anything, because we are just having fun! It is easy to make a friend while participating in an enjoyable activity, to feel a part of a group, to reach out to someone. The kids at Peace Camp lost their fear of one another in great part by having fun together.

What do you want children to learn from Sharing Our Homeland?

We want them to learn that even people whose ancestors or communities have been enemies for a very long time can learn to respect and even like the “enemy” if they just take some time to get to know them.