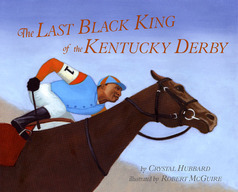 The Last Black King of the Kentucky Derby

What part of Jimmy Winkfield’s story first caught your attention? What surprised you the most?
The prevalence and success of African American jockeys in the late nineteenth and early twentieth centuries are what first caught my attention when I began researching Jimmy Winkfield’s story. I hadn’t been aware of the fact that horse racing, America’s first professional sport, featured predominantly black jockeys. What surprised me most were the successes of African American jockeys. At age fifteen, Kansas City, Missouri, natives Alonzo “Lonnie” Clayton and James “Soup” Perkins were two of the youngest jockeys to win the Kentucky Derby; Isaac Murphy was the first rider to win the Kentucky Derby three times and the first to win it in consecutive years; and Willie Simms was the only African American jockey to have won each of the Triple Crown races. Jimmy Winkfield had the most colorful career. Horse racing took him all over Europe and led to incredible adventures during the Bolshevik revolution and World War II.

Based on your research, what were the major obstacles to African Americans’ continuing participation in horse racing in the 1900s? How did society and the culture of horse racing change to lead to fewer black jockeys?
There weren’t specific rules banning jockeys of any nationality from racing, but in the early 1900s, racism was extremely common in all areas of American society. Green—the color of money—was the reason black jockeys were shunted aside. As competition for mounts grew, white jockeys wanted to earn the bigger purses. White trainers and owners began choosing white jockeys over black ones to race their horses.

When horse racing first began in the United States, slaves tended the horses for their owners. Slaves also rode the horses in both formal and informal races. Since slaves cared for the horses, they were able to learn the temperaments and habits of the animals. It was a natural progression for slaves to be the jockeys once racing became professional.

By 1910, more African Americans resided in cities than on farms, so not as many blacks were being trained as jockeys. Most of the earliest great black jockeys had been born and reared on farms or close to farms.

Have there been many Asian or Hispanic jockeys in the sport?
Wherever you find horse racing you’ll find jockeys of the nationality of the host country. Singaporean jockeys are quite notable in Asia, while in North America, Hispanic jockeys are very common. Puerto Rican jockey John Velazquez won the Belmont Stakes in 2007 aboard Rags to Riches.

Jimmy Winkfield went from being a relatively unknown, inexperienced jockey in 1900 to the favorite in the 1903 Kentucky Derby. How do you think he was able to accomplish so much in such a short period of time?
Jimmy had a couple of years of competitive racing to his credit by the time he ran his first Derby in 1900, and between 1900 and 1903 he built a fine reputation for himself. Racing was his job and he loved it, so he competed everywhere he could. He won 161 races, including the Derby, in 1901 alone. Jimmy was one of the most talented jockeys, yet he went from 391 mounts in 1902 to only 223 in 1903, a clear indication that racing opportunities for black jockeys were evaporating. Jimmy was a two-time Derby winner, yet he had to race at lower echelon tracks, such as Queen City in Newport, Ohio, so he could earn a living. Queen City was one of the so-called leaky roof tracks that Jimmy had raced on when he was just beginning his professional career. By going to Europe, where horse racing—the sport of kings—originated, Jimmy was able to practice his craft and earn a very good living.

Do the illustrations bring the book to life the way you envisioned it?
Robert McGuire’s illustrations captured the energy, passion, and heart of my text perfectly. I’ve never met Mr. McGuire. I’ve never even spoken to him, yet he brought my text to life beautifully. No book is a solo effort. The illustrator and editor can claim just as much ownership of the book as I can.

Your first children’s book, Catching the Moon, was also a sports story. Are you a sports enthusiast? If so, what are your favorite sports?
I am a serious sports fan. I like all sports, but my favorite ones to watch are baseball, football, tennis, snowboarding, and curling; and my favorite artistic sports to watch are gymnastics and figure skating. I’m not much of an athlete; but I can handle myself pretty well in one-on-one basketball, tennis, and skateboarding.

What do you think we can all learn from sports?
I think sports are important in terms of helping develop skills in working well with others and in building self-esteem. You don’t have to be the showy star of a team to be a vital component of it. A slugger such as David Ortiz is no more important than a steady base hitter such as Ichiro Suzuki. Sports are important because they allow us to have fun and condition our bodies at the same time.

What about Jimmy Winkfield’s story do you think is most important?
The thing I liked most about Jimmy Winkfield and the thing I most hope comes across in the book was his humility. He achieved great things in his sport, both as a jockey and later as a horse trainer. He had an absolutely incredible life, yet he remained what he himself called “a little black man from Chilesburg, Kentucky.” He’s a larger-than-life athlete who loved his sport and his country, but he never let success or fame inflate his ego.

What do you want readers to take away from this book? The most important thing I want readers to take from The Last Black King of the Kentucky Derby is the fact that you don’t have to be big to do big things. You can make of your life what you want if you’re willing to work hard and keep sight of the goals you set for yourself. If paths to your goal are blocked or doors are slammed in your face, forge your own path, look for new doors to open. Nike, the footwear company, had one of the best slogans ever years ago, and it applies to Jimmy Winkfield: “Nothing good comes easy and nothing easy shows how good you are.” That’s the lesson I’d like readers to take away from the story of Jimmy Winkfield’s success.