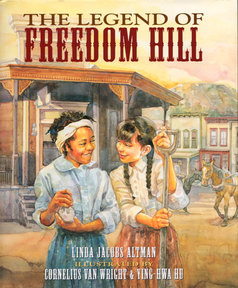 The Legend of Freedom Hill

Synopsis
In California in the 1850s, two young girls of different backgrounds become friends. Rosabel is the daughter of slaves and Sophie is Jewish. Although Rosabel has freedom papers, her mother Miz Violet does not. When a slave catcher takes Miz Violet, the girls decide to dig for gold to buy her freedom. With a good tip from Mr. Thompkins at the assay office, the girls do find gold and make a claim for a mine. Not only do they buy Miz Violet’s freedom, but they exchange their claim for all the other runaway slaves the catcher has imprisoned as well.

Background
After the Louisiana Purchase of 1803, the issue of slavery began to divide the United States. As new states were carved out of this territory, the question of whether slavery would be allowed in them arose. Neither the North nor the South was willing to upset the balance of power in Congress by having an unequal number of free and slave states. In 1820 under the Missouri Compromise, Maine entered as a free state and Missouri as a slave state. Between 1821 and 1850, six more states joined the Union and were equally divided between slave and free states. The crisis came to a head again when California asked to join as a free state. California gained its statehood under the Compromise of 1850. Under the provisions of this compromise, California was admitted as a free state. However, it was agreed that fugitive slaves who fled to free states would be returned to their owners. The Fugitive Slave Act of 1850 mandated the return of runaway slaves, regardless of where in the Union they might be situated at the time of their discovery or capture. Heavy penalties were imposed on those who aided fugitives or interfered with their return.

California’s request for statehood was prompted by the discovery of gold there in 1848 and the subsequent flood of people who poured into the territory from all parts of the world. The population of California increased from about 15,000 in 1848 to more than 100,000 by the end of 1849.

Before Reading
Prereading Focus Discussion and Questions
Before reading The Legend of Freedom Hill with the class, you may wish to share the background material to help students understand the setting of the story. It is especially important that students understand the role of the Fugitive Slave Act and how it impacts the characters in the story. Tell students that enslaved Africans were considered property by their owners. When slaves ran away, they became fugitives under the law. Slave catchers such as the one in this story were paid to find and return runaways to their owners.

You might also use questions such as the following to focus students’ attention on other aspects of the story.

Exploring the Book
Draw students’ attention to the book title, The Legend of Freedom Hill. Discuss what a legend is. Ask students to describe other legends they have read or heard? Talk about how legends get started and how they grow.

Display the book cover. Who are the main characters in this book? Why do you think they are smiling? Does this book take place in the past or present? How do you know?

Setting a Purpose for Reading
Have students write down some questions they would like answered when they read the book. For example, Where or what is Freedom Hill? What is the story behind the name? Then ask students to read to find out who is telling this story.

Vocabulary
The Legend of Freedom Hill contains numerous colloquial expressions used by the narrator. Write some of these on the chalkboard (see suggested list below) and ask students to find them in the text. Then have students read the passages aloud to practice fluency. Help students clarify meanings of the words and phrases as used in the story.

In addition to “abolitionist,” there are other words which may be unfamiliar to students, but which are crucial to understanding the story. Assign a student to look up each of the following words and report his or her findings to the class.

READING AND RESPONDING
Discussion Questions
After students have read the book, use these or similar questions to help guide their comprehension. Encourage students to refer to passages or pages in the book to support or illustrate their responses.

Reader’s Response
Use the following questions or similar ones to help students practice active reading and personalize what they have read. Suggest that students respond in reader’s notebooks or in oral discussion.

Other Writing Activities
You may wish to have students participate in one or more of the following writing activities.

Art
Have students use the illustrations in the book to make comparison charts of life in the 1850s and the present. Categories in which students might make comparisons include: how people dressed, how they traveled, games children played, and so on.

Music
Explain to students that enslaved Africans often communicated through their music. In some songs they described their suffering. In others they spoke of escape. Songs such as “Follow the Drinkin’ Gourd” contained disguised directions for those heading north toward the Big Dipper. Explore the history of these songs and teach students traditional songs such as “Go Down, Moses,” “I Got Shoes,” “Follow the Drinkin’ Gourd,” or “Swing Low, Sweet Chariot” to help students get a sense of the power of this music.

Literature
Enslaved people created tales about their plantation experiences. In many of these stories, animals took the place of people. One of the most common animal characters was Brer Rabbit. Although a rabbit is small and seemingly helpless, Brer Rabbit was smart, clever, and tricky. Despite getting into trouble, Brer Rabbit usually got out of it. Read one of the Brer Rabbit tales to the class. Then have a discussion about how these tales both entertained and inspired those who told them.

About the Author and the Illustrator
Linda Jacobs Altman was born in Winston-Salem, North Carolina, and now lives in Clearlake, California, with her husband and many indoor and outdoor pets. Altman has worked in the educational and library fields for many years, publishing books on numerous topics including the California gold rush and Jewish history. Altman is the author of several LEE & LOW titles. The Legend of Freedom Hill was named a Notable Children’s Book of Jewish Content by the Association of Jewish Libraries and was included in Bank Street College’s list of Best Children’s Books of the Year. Her first picture book, Amelia’s Road, a “Choices” selection by the Cooperative Children’s Book Center, is a popular story about a girl in a family of migrant farm workers. Singing With Momma Lou, in which a young girl helps her grandmother, who suffers from Alzheimer’s, regain some of her memories, is also listed as one of Bank Street College’s Best Children’s Books of the Year.

Cornelius Van Wright and Ying-Hwa Hu are an award-winning husband and wife team of illustrators. Van Wright is a native New Yorker with a degree in fine arts from the School of Visual Arts. Hu, born in Taiwan, has an Associate of Arts degree from Shih Chien College in Taipei and a B.S. in Education from St. Cloud State University in Minnesota. The two have been illustrating children’s books together since 1989. Among their titles for LEE & LOW are Zora Hurston And The Chinaberry Tree, an American Bookseller magazine “Pick of the Lists” title, and the year-round favorite, Sam And The Lucky Money, a “Choices” selection by the Cooperative Children’s Book Center and an IRA Notable Book for a Global Society. Van Wright and Hu live with their two children in New York City.