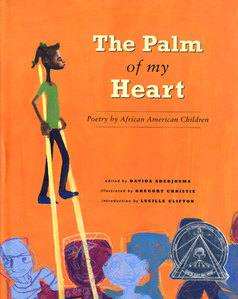 The Palm of My Heart

"…after writing & writing & revising then…writing, again, there comes that special moment when the sound & rhythm & texture of words become uniquely yours. your VOICE. which is different than his/hers/mine. it is my goal as an artist to help students seize a living language that enables them to tell their stories in their own way."

I began my writing career at eight years old. As a poet, Gwendolyn Brooks used to visit my elementary school and talk to us–a "real" poet talking to us!–about poetry. She'd read her work, and then explain how the words came to be. So I began to write four-line, rhymed verse.

But the first poem that really touched me inside, that made me shake and shimmer, was Nikki Giovanni's Peace Be Still. I'd read Black Feeling, Black Talk/Black Judgment. Then I found out that Nikki–I'd taken to calling her by her first name, that's how close I felt to her words–had recorded the poem, on an LP, accompanied by the New York Community Choir. Poetry and music in one, as one! I was thrilled; and went around speak/singing that poem for months: peace, be still! Peace, be still!

I started writing pages-long, highly-syncopated, black nationalistic poetry. Right on, right on! Power to the people, especially women-people poetry. But the poems became so long, that the switch to fiction and playwriting was a natural progression. While I could express outbursts of emotion through poetry, I found that it was more natural for me to truly express myself through short stories and plays. Each form just allows me more room in which to work.

It is my early exposure to the combination of words and music that lead me to teach children creative writing using these combined mediums. In order to create new worlds through words, one needs not only a sense of wonder and storying, but the tools with which to communicate those visions to others. I have found that using an interdisciplinary approach to creative writing, one that includes dance, collage, and visualization exercises, not only frees up students' imaginations, but encourages each of them to stretch beyond their self-imposed limitations.

Born in 1971 in Plainfield, New Jersey, Gregory Christie says he's "always known" that he wanted to become an artist. "I can remember being five years old and copying characters from comic books," he recalls. "Even then, I always felt a sense of joy from painting and drawing."

At only 25 years old, Mr. Christie was named a 1997 recipient of the Coretta Scott King Illustrator Honor Award for his first picture book, The Palm of My Heart: Poetry by African American Children. In addition to the King Award, The Palm of My Heart also received the Reading Magic Award from Parenting magazine, the country's top resource for parents.

During the six months that Mr. Christie worked on The Palm of My Heart, he was also working the graveyard shift in the security department of New York City's Guggenheim Museum. He met with LEE & LOW's art director and editor early in

the morning, as he was getting off work, and then went home to paint before getting some sleep before the next night shift. "I pushed myself to stay alert," he explains. "I paint fairly quickly, but my biggest challenge with this first book was to find my mark - to do that first image as a foundation and then build from there. The first piece has to feel good, and usually it's the piece I feel most connected to; it's my messenger." Mr. Christie's "messenger" for The Palm of My Heart was "Black Hands" (shown at right). It set the lyrical, spirited tone of the book.

The rest of the book flowed from that first piece. "I was nervous about doing my first book," Mr. Christie says. "I thought the process would be very controlled. But then I really enjoyed that the art director said, 'Do what you have to do."

His family has always been a strong inspiration. "My brother and my father drew a lot," he recalls, "and my mother always believed in me - she put me through art school."

Other sources of inspiration include the work of American artists William H. Johnson and Romare Bearden and the children's books of Ezra Jack Keats.

Mr. Christie now lives and paints in New York, in the historic Fort Greene section of Brooklyn. His work has appeared in The New York Times, the Village Voice, and on the covers of numerous music CDs. "New York is a constant influence," he notes. "The browns and grays of the buildings, the colors of the city, all go into my palette."

His second book is Richard Wright and the Library Card. Asked about his "messenger" for this second book, Mr. Christie describes a painting of a 17-year-old Wright sitting alone in his room, thinking. "I like it because most creative people spend time alone, pensive, in their work. I spend a lot of time doing that."