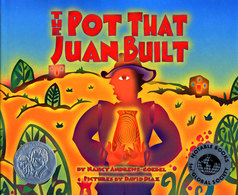 The Pot That Juan Built

While few artists remember the precise moment when they decided to make art their career, David Diaz is an exception. He clearly recalls the day in first grade when he completed a vowel worksheet that was filled with pictures of objects with incomplete words written below. A line drawing of a nose was accompanied by "n_se," and young Diaz compliantly added the "o" to the word. After that, he was inspired to use his thick red pencil to complete the picture of the face on the worksheet, and he has been drawing faces ever since. Because he did not know the term "illustrator," in a moment that he calls a mini-epiphany, Diaz realized he would become a "drawer."

Diaz grew up in southern Florida after his family moved from New York, his birthplace. Childhood ended abruptly with his mother's untimely death when Diaz was 16. His art then became an important emotional resource. A supportive high school teacher pointed the way for students to become artists by guiding them to competitions. His art blossomed as Diaz attained success in the contests.

Another opportunity proved to be invaluable for Diaz when he worked several years as an apprentice for hyper-realistic sculptor Duane Hanson. Following graduation from Ft. Lauderdale Art Institute, Diaz moved to southern California, where he eventually established his own design and illustration business, Diaz Icon. Gradually, he began to turn down design projects in favor of illustration assignments, because he did not want to look back with regret and wonder "What if I had just focused on my true passion–illustration?"

One of the many book cover illustrations the artist had completed for Harcourt, Inc., caught the eye of editor Diane D’Andrade, and she offered Diaz the chance to illustrate a picture book based on Los Angeles street riots, Smoky Night (1994), written by Eve Bunting.

Diaz approached Smoky Night with a desire to make an impact on the reader. Inspired by sketches made while on a trip to Brazil, he created gouache paintings framed by bold borders with intricate photographic collages as backgrounds. The relatively flat paintings are perfectly matched to the textured collages, vibrant when the action heats up, softened by the end of the story. To the artist’s surprise, his first picture book was awarded the 1995 Caldecott Medal.

Other books have extended Diaz’s horizons and guided him to try a variety of media and styles, including the vibrant computer art in The Pot That Juan Built. The Pot That Juan Built is a visual biography and tribute to Juan Quezada, the premier potter in Mexico. Diaz, who is also an accomplished potter, was personally drawn to the story of a man who was able to make a significant contribution (inspirationally, financially, and spiritually) to his community through his art.

Diaz has never tired of drawing the faces he first explored as a six-year-old, but his interests have grown to encompass reading for pleasure and studying history and science. He also enjoys collecting furniture and accessories from the American arts and crafts era and glassware from the 1960s. Diaz lives outside San Diego, where he finds his greatest joy in his children.

While on vacation in Mexico in 1995, Nancy Andrews-Goebel met Juan Quezada, the premier potter of the land, and was immediately fascinated by his work and inspired by his spirit. Two years later she and her husband made a documentary video about Mata Ortiz pottery and more recently, she was inspired (motivated) to write the picture book, The Pot That Juan Built. "The idea [for this book] came to me one evening after reading another adaptation of The House That Jack Built to a group of students," explains Andrews-Goebel. "After simply playing around with the words for a while, I realized that this was an engaging and important story worth researching and refining."

The Pot That Juan Built tells the story of Juan Quezada’s discovery of ancient pottery-making techniques. With local materials and primitive methods of the Casas Grandes people—including using human hair to make brushes and cow manure to feed the flames that fire his pots—Juan creates stunning pots in the traditional style. Each is a work of art unlike any other. This celebratory story also tells how Juan’s pioneering work has transformed Mata Ortiz, the northern Mexican village where Juan began and continues to work, from an impoverished village into a prosperous community of world-renowned artists.

Andrews-Goebel, a native of Baskersfield, California, is a member of the National Association for the Education of Young Children. Andrews-Goebel, a substitute teacher, earned her Bachelors degree from the University of California. She has written multicultural training materials and produced cross-cultural videos for Head Start (1988-90). Andrews-Goebel also co-produced and wrote the documentary video, "Mata Ortiz Pottery: An Inside Look" with her husband, Ron Goebel (1997). In addition to writing, Andrews-Goebel enjoys traveling, herb gardening, and beachcombing. She and her husband live in the northern California town of Cayucos with their three cats: Kitty, Flanna, and Alice. The Pot That Juan Built is her first book.

Andrews-Goebel’s love for travel energizes her love for telling stories. "[My ideas for stories come] from the interesting, out-of-the-way places I visit and from the extraordinary people I've had the privilege to know. I lived in Mata Ortiz for a year and continue to visit often. The story of Juan Quezada is almost mythological. He is such a positive and non-traditional role model for children and artists everywhere."