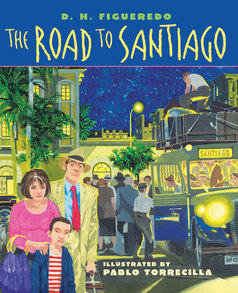 In 1953 a young Cuban attorney named Fidel Castro and a group of men and women attacked a military barrack in Santiago, Cuba. They wanted the people of Cuba to join them in a revolution against the dictator who ruled their country, Fulgencio Batista. The attack failed, and Castro and his followers were sent to prison. Castro was released three years later and soon hid in the mountains where he formed an army of rebels. From 1956 to 1958 the rebels fought against the government dictatorship. On January 1, 1959, Batista acknowledged defeat and left Cuba. Castro took over the government and has ruled it as a communist country ever since. The Road to Santiago is a a book based on a

true events that took place during Christmas of 1958 when the author was a child.

"I’m a child of the Cuban Revolution," says Figueredo. "A lot of the conflict occurred in Santiago de Cuba where my grandmother lived, and since we visited her for the holidays and I would spend my summers with her, I saw some events and heard about others." One of those events included an attack on a police station by some university students. Figueredo says that his uncle climbed up onto the roof to watch the battle, and that a couple of the leaders of the insurgents were from his grandmother’s neighborhood. Those two men were assasinnated by the police. Figueredo also alludes to one of the scenes in the book, saying that the incident is mostly true. "The train incident that I narrate took place pretty much as I told it in the story. There were more characters involved and the actual derailment happened somewhere on the middle of the island. When we arrived at that spot, we were informed that the rebels had blown off the tracks and that there would be no service to Santiago." Figueredo also states that the reader should remember that most of the students were not communists and were fighting for true freedom, which Castro promised but did not deliver.

Although The Road to Santiago is a fictional look at historic events, it is also a book about family and the importance of being together on the holidays. One of the book’s overall themes is keeping holiday traditions alive. When asked what traditions his family observes, Figueredo responded, "In the U.S. we always try to stay together for Christmas. My mother and father-in-law both come to New Jersey from Florida, or we try to get to Florida to be together. We always have a Cuban meal on the twenty-fourth and an American Christmas dinner on the twenty-fifth. We always make it a point to remember those who are gone: my father, my mother-in-law and my grandmother."