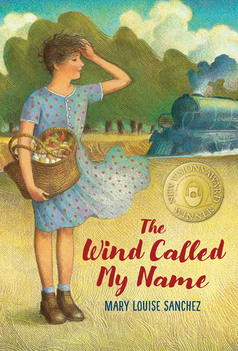 The Wind Called My Name

Margarita is moving with her family from New Mexico to a small town in Wyoming in 1934. When they arrive and reunite with her father, a railroad worker, they begin to settle in and start using English instead of Spanish to fit in with the townsfolk. When Margarita breaks a lamp at the local general store, she must work off her debt and in doing so befriends the store owner's granddaughter, Caroline. Though she's friendly enough, Caroline constantly demonstrates she regards Margarita as other by calling her Mexican instead of New Mexican. Meanwhile, while most of the town is cordial with the newcomers, there is a growing unrest as white men become angry that "beaners" are "taking all the jobs" (sound familiar?). Throughout, Margarita puts on a strong face as she finds more and more ways to contribute to her family's income and do well in school while putting up with microaggressions. Margarita, though, is an industrious, clever, and plucky protagonist worth rooting for.