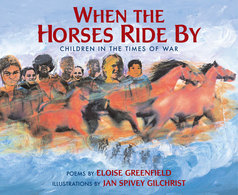 When the Horses Ride By

Greenfield’s beautiful new picture book is a poetic recollection of children’s experiences in wartime. Each of her simple, understandable, and haunting poems corresponds to a different war. Greenfield starts with ancient China and moves all the way through history to the second Gulf War. On her way, she stops to hit on subjects that may be foreign to elementary school students, such as apartheid, struggles for economic and political justice in Central America, and ethnic and religious conflicts in the former Yugoslavia. Younger students might get lost in the unfamiliar content of Greenfield’s poems were it not for Gilchrist’s insightful illustrations. Gilchrist uses mixed media — from heavy paint to newspaper clippings to photographs to pen-and-ink drawings — to portray Greenfield’s message. The children she portrays are at once smiling and stoic, on edge and afraid. It is Gilchrist’s ability to put life into her art that makes her work masterful; each of her subjects has a personality that jumps off of the page and into the mind of the reader. Greenfield and Gilchrist are a brilliant team, making difficult content understandable to its intended audience. When the Horse Ride By is recommended wholeheartedly for both children and adults. Overall, it is an evocative and poignant book, perfect for use inside the classroom and at home.