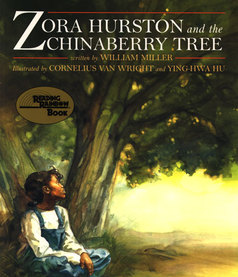 Zora Hurston and the Chinaberry Tree

Since 1994, William Miller has published seven picture books with Lee & Low, in addition to several titles with other publishing houses. He made his picture book debut with Zora Hurston and the Chinaberry Tree, which was a "Reading Rainbow" selection, and which Booklist praised as being "lyrically told."

With narrative that reads like poetry, William Miller brings a beautifully distinct voice to all of his picture books. In addition to writing for children, he is a professor of creative writing and African American literature at York College in York, Pennsylvania.

Question: How did you get interested in writing children's books? How did you know when your first picture book manuscript was ready to send to a publisher?

William Miller: I started out as a poet who wrote poems about famous African American writers, such as Zora Neale Hurston and Frederick Douglass. My high school English teacher, who is also a children's book author, encouraged me to write a picture book based on my poems. I expanded a poem on Hurston's life and simplified the language for children. I sent the manuscript out when I felt I had written the best possible, most poetic story I could tell.

Q: What draws you to the African American themes that are prevalent in your work?

WM: I've taught African American literature for many years at York College in Pennsylvania. Personally, I am drawn to the themes of struggle, renewal, and celebration in the literature I teach. No matter how many times I teach the works of Zora Neale Hurston and Richard Wright, I find something new, something that inspires me to live my life on a higher level.

Generally, I've found that most people are not critical of the fact that I am a white author writing about the African American experience. Those who are critical have not usually read my work and are taking a hard political stance. I once shared a podium with an African American professor and asked her what she thought about a white author writing about African Americans. She responded by saying that she would hate to be limited to writing strictly about her own culture–or only about women, etc. Creative artists are explorers, we both agreed, and should have no limitations.

Q: Do you have any tips for children's book authors just starting out in the current tough market?

WM: If you are just beginning to write for children, you should write about what matters to you as an individual. Tell stories that matter to you and the children you want as an audience. Tell stories you wish you had read as a child. Don't write stories for a certain marketplace just because you think they might sell. The joy of writing should be placed above any ambitions you have for publication.

Q: What has been the most surprising experience about being a published children's book author?

WM: The wonderful audience I've found for my work. There is no more sincere and appreciative group of readers than young children. Their enthusiasm for my work has also been the greatest reward of all. I wish I had more time to write and to promote my books across the country. To write for children and promote the books full-time is still my goal.