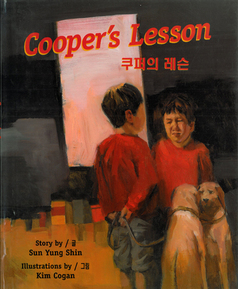 Cooper caught his reflection in the window. Brown hair, fair skin, and some freckles. Grandmother Park always said, "Such white skin!" and Grandmother Daly always said, "What brown skin!" One cousin always teased him about being "half and half."

Cooper has had about enough of being half and half. And he's certainly had enough of Mr. Lee, the owner of his neighborhood grocery store, speaking to him in Korean even though Cooper can't keep up. Why can't things be simple? Why can't he just be one thing or the other?

One moment in Mr. Lee's store changes everything for Cooper. Before long he realizes that the question of who we are is never simple-whether you talk about it in English or Korean. Kim Cogan's richly hued oil paintings perfectly complement this story of identity and intergenerational friendship, and author Sun Yung Shin brings her characters to life with tender, vivid prose.

was born in Seoul, South Korea in 1974. She was adopted by American parents in 1975 and grew up in the Chicago area. A poet, essayist, and teacher, Sun Yung now lives in Minneapolis with her husband and their two young children.

was born in Pusan, Korea, in 1977. After coming to the United States to live with a loving family who adopted him, Kim grew up in the Bay Area. An award-winning young artist, Kim has exhibited his paintings in over a dozen shows nationwide.