Some people are lucky enough to parlay something they love into a career. Author John Coy has been able to do this with three of his favorite things: reading, writing and sports. Coy’s first book with LEE & LOW, Strong to the Hoop, tells the story of a boy who finally gets his chance to play basketball with the big kids, and he has to prove he can hold his own. The title was named an ALA Notable Book and a Notable Book for a Global Society by the International Reading Association. Around the World, the author’s second book with LEE & LOW also features basketball. It begins with a simple game of Around the World on a New York City basketball court, which leads to a fantastic journey around the globe. 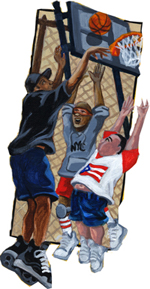 John Coy says it was picture books in general that inevitably inspired him to become a children’s author. “I became a writer because I was a reader,” says Coy. “I was reading lots of picture books to my daughter when she was little, and I was amazed by how much these books had changed since when I was a kid.” Not only has the art in picture books changed dramatically, so has the subject matter. “One picture book I liked was Baseball Saved Us, a LEE & LOW book about life in a Japanese internment camp during World War II. This was not a subject that would have been in a picture book when I was a child,” says the author. “I was intrigued with the changes and decided to try to write a book myself.”

Around the World is presented in a graphic, comics format, highlighting the sights, sounds, and feel of a pick-up game of basketball. Coy has always loved the sport. “I love the movement and fluidity of basketball. I love the pushing and shoving underneath, and the dance for position. I love listening to the talk on the court and the wide mix of ages and backgrounds of the players. When you play, what matters is keeping the court… and everybody is chasing that flow as the game unfolds.” Coy even remembers how he felt the first time he played basketball. “I was in the gym at Manz School in Eau Claire, Wisconsin. Somebody passed me the ball and I turned, jumped, and shot. The ball banged off the board for a miss, but what I remember so clearly is the feeling of being in the air, the feeling of flying. That feeling of leaving the ground was what I wanted to experience.”

Around the World literally takes the reader all over the world, from New York to Australia to China and seven other locales. How did the author pick these locations? “I love to travel, so to combine two passions—basketball and travel—was wonderful,” says Coy. “I picked the countries to highlight the geographical reach of basketball. I also tried to represent some of the countries that have sent many international players to the NBA (National Basketball Association).” Coy laughs, saying that doing research for the book definitely felt like more fun than work. “Talking to people from various countries to get the locations and the languages right was the fun part of the research. Playing basketball on different courts in different parts of the world was a thrill. Even when I didn’t know the language of the players, the language of basketball would be clear.”

So what do kids think of Around the World? “I’ve had a chance to shown some kids an advanced copy of the book, and they have been very excited,” says Coy. “They’ve also expressed excitement about the art. I can’t wait to hear what else they have to say.” The author says is always interested to know what readers find in his the books. “My job is to write the best book I can. Then the readers will decide what they want to take away. I have learned not to predict what this will be. Instead I am ready to listen and hear what the readers have to say.”