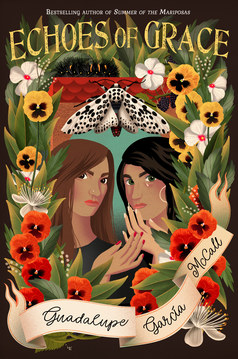 Sisters Grace (Graciela) and Mercy (Mercedes) have had a strong bond ever since their mother’s death when they were little. But now, as they make plans to go to college together, tragedy strikes again, and their relationship breaks seemingly beyond repair. It doesn’t help that Grace is experiencing more episodes of what her family calls “echoes”: visions and premonitions that raise questions about her mental health. In chapters that alternate between Texas in 2011 and a trip south of the border three years earlier, Grace slowly recovers memories and uncovers clues about her mother’s death, her own echoes, and a legacy of secrets. Grace knows she needs to get through the horrible memories, and she can’t do it alone. But with an angry sister, an absent father, and a rude grandmother, Guelita Rosa, where will she find support? In addition, a new neighbor begs for friendship (or more), just as Grace is learning of the reality of abusive men. Can she trust this boy? Grace’s story delves honestly into tough topics such as domestic violence, femicide, and the dangers of keeping secrets. McCall weaves Mexican American and border town culture and lore into a realistic, raw, poignant portrayal of family tragedy, trauma, grief, and the healing power of facing the truth with a loved one at your side.

Booklist
The Bulletin of the Center for Children's Books