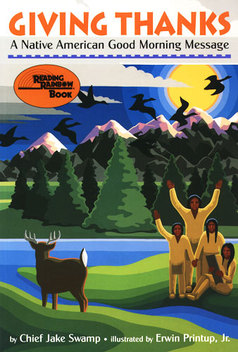 Synopsis Mohawk parents have traditionally taught their children to start each day by giving thanks to Mother Earth. “To be a human being is an honor, and we offer thanksgiving for all the gifts of life,” begins the Thanksgiving Address. This Native American good morning message is based on the belief that the natural world is a precious and rare gift. The whole universe–from the moon and the stars to the tiniest blade of grass–is addressed as one great family It is a celebration of the beauty of Mother Earth, which Chief Jake Swamp of the Mohawk Nation, who is also a founder of the Tree of Peace Society, has adapted especially for readers of all ages.

Background The words in this book are based on the Thanksgiving Address, an ancient message of peace and appreciation of Mother Earth and all her inhabitants, that are still spoken at ceremonial and governmental gatherings held by the Six Nations. These words of thanks come to us from the Native people known as the Haudenosaunee, also known as the Iroquois or Six Nations–Mohawk, Oneida, Cayuga, Onondaga, Seneca, Tuscarora. The people of the Six Nations are from upstate New York and Canada. According to the Canadian and U.S. census there are 74,518 Iroquois in North America.

The three Mohawk clans–Wolf, Turtle, Bear–in turn contain three sub-clans; they hail nine Chiefs in all (Chief Swamp is a Chief of the Wolf Clan) and nine clan mothers. In all the Six Nations, there are 50 Chiefs, each of whom is selected by clan mothers who observe children for leadership skills. The illustrations contain much symbolism. Two examples are: water, which symbolizes continuance because life forms depend on it; and the four winds, which are represented by different animals, i.e., the east by the moose, the west by the cougar, the south by the (gentle) deer, the north by the (strong) bear, and are considered to play a role in how crops grow.

Before Reading Prereading Focus Discussion and Questions Before students read the story, you might want to discuss one of the following questions as a motivation for reading.

AFTER READING ACTIVITIES After reading, discuss the story. Some questions that can be used to generate discussion are:

Vocabulary Ask students to write down words they do not know into their vocabulary notebooks. After studying the meanings, ask them to define the words in their own terms. (They might want to guess meanings by putting the words in context, or substituting another word for words they know.)

Reader’s Response Journal To promote active reading, you might want students to keep a reader’s response journal as they read the story. This journal will help students personalize what they are reading.

Other Writing Activities Ask students to respond to one or more of the follow writing activities:

ELL/ESL Teaching Strategies Following are activities for engaging students who speak English as a second language.

Interdisciplinary Activities To help students integrate their reading experiences with other curriculum areas, introduce some of the following activities.

Mathematics Find out the distance between the earth, sun, and moon. (Since the numbers are astronomical put them in relation to distances that the students are more readily acquainted with, i.e., proportional to the number of football fields, certain states, etc.) 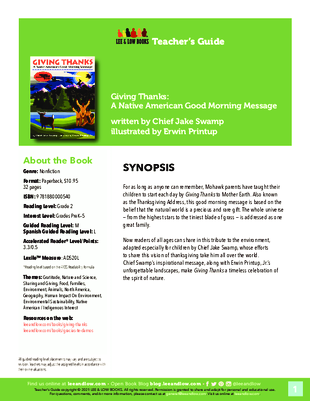