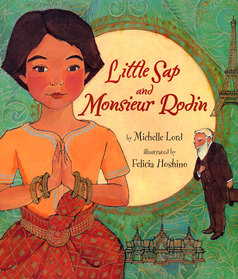 A charming story based on a little-known encounter in which a Cambodian dancer met a famous French painter. Little Sap, a court dancer, travels to Paris with her troupe to perform in the 1906 Colonial Exhibition. She meets Auguste Rodin, who is impressed by the classical beauty of the Cambodian dance that dates back to the Golden Age of the Khmer empire, and he is drawn to sketch Little Sap. ‘His eyes sparkled when she danced as if he were seeing something magical.’ It is these sketches, Danseuse Cambodgienne, that we received with acclaim in 1907. The inspirational effect Little Sap and other Cambodian dancers had on Rodin is clearly stated in his own words: ‘When they left, everything went cold and dark. I thought they had taken the beauty of the world with them… ‘ Mixed-media illustrations with deep aquamarine blue and burnished reds illuminate the lyrical text that begins with Little Sap’s selection and training: ‘The poses became dances and the dances told stories.’ Lovely.