Eloise Greenfield is a celebrated poet and the author of more than forty books of fiction, poetry, and biography for children, including the Coretta Scott King Award winner Africa Dream, and The Coretta Scott King Award Honor books Mary McLeod Bethune and Childtimes: A Three Generation Memoir co-written with her mother. Greenfield is the recipient of the Hope S. Dean Award from the Foundation for Children’s Literature and the NCTE Award for Excellence in Poetry for Children. She has received the Hurston/Wright Foundation's North Star Award for Lifetime Achievement, a Lifetime Achievement Award from the Moonstone Celebration of Black Writing, and an Honorary Doctorate of Education from Wheelock College in Boston. Greenfield has also been inducted into the International Hall of Fame for Writers of African Descent. She lives in Washington, D. C. Here, Greenfield talks about Paul Robeson and how his accomplishments will inspire a new generation of readers who may never have heard his name.

When did you first see or learn about Paul Robeson?

My parents loved Paul Robeson, and I can't remember a time when I didn’t know his name. I don’t remember when I first heard his beautiful voice. Robeson's was one of the many voices I heard on the radio, including Roland Hayes's, Marian Anderson's, Robert Merrill's, Louis Armstrong's, Risë Stevens's, and others. I’m sure that I saw magazine photos of Robeson singing, and I also may have seen him in a newsreel at the movies. The memories have merged. But however it happened, I know that the strength in his face and the power of his voice made a great impression on me.

What is your favorite recording of Paul Robeson to listen to? What makes it special?

I love many of Robeson’s recordings, but if I had to name a favorite, it would be the African American spiritual, "Deep River." He sings it in a very low key. His voice is as deep as the river. It’s an exceptionally moving performance.

Your biography of Paul Robeson was originally published in 1975, the year before he died. Why is Paul Robeson's story still significant today? 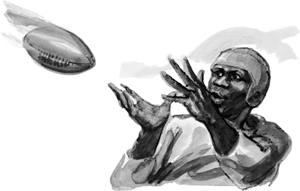 Paul Robeson's story is still significant because of the enormity of his contributions in so many areas: in the arts—music, theater, and film; in sports; in his work for justice and the good of human beings all over the world. Through his courage and his devotion to humane causes, he touched the people of many nations. They, in turn, by word of mouth and recorded tributes, have passed his story on for future generations.

How has the world changed since you first wrote about Paul Robeson? How is it still the same?

At first glance, it would appear that technological changes (cell phones, the Internet, digital recorders, etc.) are the most dramatic changes that have taken place since the earlier biography. However, on an immediate second look, I see other changes, such as the increased active interest in obtaining clean water, recycling, and other environmental concerns that have become a part of our daily routines. One of the most dramatic changes, of course, is the election of Barack Obama as the first African American president of the United States.

In some unfortunate ways, the world is the same as it always has been. Poverty, hunger, and violence are still very much with us. But hope and courage also continue to be a constant part of the human story.

Paul Robeson excelled at academics, several sports, oratory, music, and acting. In your research, did you find anything with which he struggled?

Though Paul Robeson was brilliant, none of his accomplishments just fell into his lap. He was a scholar and approached all of his endeavors with study and thought. He was meticulous in choosing the vocal interpretations of the speeches he made and the songs he sang. He took great care in developing the voices, posture, and movements of the characters he played. He strategized and practiced in order to excel at sports. He studied languages and became fluent in at least twenty (some sources say twenty-five). He analyzed the similarities he found among languages, and this confirmed his belief that human beings are connected.

What lessons would you like readers to take away from the story of Paul Robeson's life?

I want readers to know him. I want them to add his life story to the body of knowledge they are acquiring. I hope they will understand, as Robeson did, the importance of developing the talents they are all born with, and especially, I hope they will be inspired to care about themselves and other people.