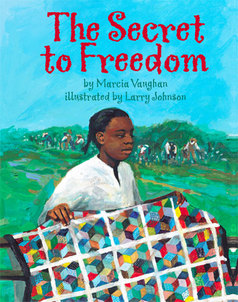 The Secret to Freedom

Synopsis
Great Aunt Lucy tells her grandniece the story of an old quilt square which symbolizes an important role played by quilts in alerting slaves about escape plans during the pre Civil War years. Lucy’s brother brings home some quilts from another plantation where he has been on loan. He explains how each quilt pattern has a special meaning for slaves planning to escape on the Underground Railroad. For example the monkey wrench pattern means “collect tools needed” and the wagon wheel pattern means “pack belongings”. Whenever an escape is to take place, Lucy hangs out the quilt indicated by her brother. He then leads the runaways to where their journey will begin. When Albert is caught off the plantation and whipped one night, he knows he too will have to run. Lucy remains behind knowing that she would only slow down her brother because she is lame, but she gives her brother a quilt square with a bright yellow star on it for good luck. Many years later, after the war is over, Lucy receives the quilt scrap in the mail and learns that her brother is alive and well and coming to visit her.

Background
The Underground Railroad was a covert system of trails, people, and safe houses that helped slaves escape during the years 1804 to 1865 when slavery was abolished. More than 75,000 fugitives made their way from southern plantations to states in the North or to Canada. The runaways were known as “passengers,” the guides were called “conductors,” the safe houses were “stations,” and those who hid the slaves in their homes were “stationmasters.” Since most slaves did not know how to read or write, and few had ever been off the plantation, a system of codes and secret signals was used to pass along information needed by the fugitives. Among these signs were specific quilt patterns. The quilts were hung outside on railings to convey their messages. See the Author’s Note at the end of this guide for information about the meanings of the most important quite patterns. The patterns are also pictured on the back cover of the book.

Before Reading
Prereading Focus Questions
Before introducing the book, you may wish to have students discuss one or more of the following questions as a motivation for reading.

Exploring the Book
Write the book title on the board. Ask students: What is freedom? Why do you think there is a secret to it in this story?

Display the book and invite students to examine the cover illustration. Ask students what they think is the girl holding. What might that have to do with freedom? Who are the people in the background?

Setting a Purpose for Reading
Ask students to read to find out what the secret is in this story, and how it relates to freedom.

Vocabulary
Write the following birthday-related words from the book on the chalkboard. Challenge students to think of different ways to sort the words. For example: food, things to do at a party, kinds of celebrations. Encourage students to add other words to each category. Then have students take turns using the words in their own sentences.

After Reading
Discussion Questions
After students have read the book, use these or similar questions to help guide their understanding of the book. Encourage students to refer to passages in the book to support their responses.

Reader's Response
Use the following questions or similar ones to help students engage with the story and personalize the text. Students might respond in reader’s journals, oral discussion, or drawings.

These strategies might be helpful to use with students who are English language learners or who are learning to speak English as a second language.

Social Studies
1. Provide a map of the various routes used by escaping slaves on the Underground Railroad. Help students identify places along the routes.

3. Students might also learn more about plantation life before the Civil War and explore why this way of life was so dependent on slavery.

Write these similes from the book on the chalkboard. Teach students that a simile is a figure of speech that compares two unlike things using the words like or as. Then have students identify the two things being compared in each simile.

Science
Explain that the fugitive slaves traveled at night through fields, woods, and swamps to avoid detection. The North Star served as a guide on clear nights. The North Star, also known as Polaris, is the last star in the handle of the Little Dipper. Help students identify this constellation, as well as the Big Dipper, on a star map. They may also wish to try finding these constellations in the sky on a clear night.

Art
Encourage students to study the patchwork quilt patterns shown on the back cover of the book and read about the meaning of each. Then challenge them to design their own patterns that convey “secret” messages.

Music
Have students learn the words to the song “Follow the Drinking Gourd.” Then help students decode the song to find the directions to freedom. You might also introduce two other songs used by fugitives: “Chariot’s a Coming” was sung to announce the arrival of a conductor (guide) on the Underground Railroad, and “Good News Neighbor” was sung to report the safe arrival of a fugitive in free territory.

Author's Note
In the years before the Civil War began in 1861, the Underground Railroad helped more than 75,000 slaves reach freedom. The Underground Railroad was not actually a railroad, and it did not go underground. It was a secret system of pathways and trails that guided escaping slaves from Southern plantations to the Northern states and Canada where slavery was illegal

Members of the Underground Railroad were black and white, male and female, free citizens, slaves, and former slaves who had gained their freedom. Runaway slaves were called “passengers,” while those who guided them along the way were called “conductors.” “Stationmasters” were people who hid the runaways in their homes or other safe buildings called “stations.”

Most slaves had never set foot off their plantations and knew little about the North or how to reach it. Because of this, signs, symbols, and codes were used to transmit important information to slaves planning to escape on the Underground Railroad. Common quilt patterns made up one of these codes. The quilts could be hung out to air without being noticed by the plantation owner, yet for slaves who knew the code, the quilt patterns told them how to plan and carry out their escape.

The most important quilt patterns in the Underground Railroad code are described below. There are also pictures of them on the back cover of the book.