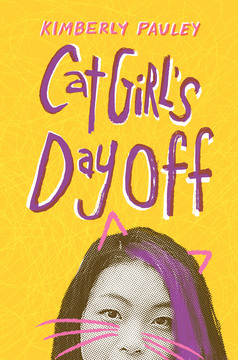 As it is, Cat Girl’s Day Off is fast and funny, with the spot-on cat comments that liberally sprinkle the pages being especially entertaining. Though Natalie is a well-developed character with genuine teenager-ish concerns, and people’s lives actually are in danger, it’s not a book that takes itself too seriously, which makes it a very pleasant break from reality.

Note on diversity: Tu Books publishes diverse sci fi/fantasy for kids and teens, and as is apparent from Natalie’s picture on the cover, she’s half-Chinese. One of her two buddies is gay, and half Asian himself, and although his character doesn’t go much beyond wacky best-gay-guy friend, it’s nice to have this additional bit of diversity.

Note on age of reader: Cat Girl’s Day Off is ostensibly YA–it’s a high school book. But it is one that a middle school kid could read without blushing–no sex, and only a bit of cat-fighty violence. In fact, it’s a perfect one for the eleven or twelve year old cat-loving girl whose not quite ready for the steamy romance of most YA paranormal–this, instead, is a light-hearted mystery with a paranormal premise.