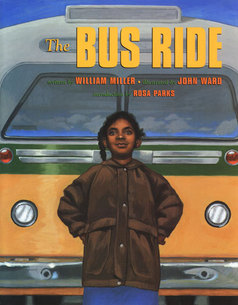 Synopsis
This book is a fictionalized version of Rosa Parks’s historic stand on December 1, 1955, when she refused to give up her seat to a white passenger on a bus in Montgomery, Alabama. William Miller, author of The Bus Ride, has retold the story from the point of view of a young girl named Sara. In Miller’s story, it is Sara who goes to the front of the bus out of curiosity and an emerging sense of injustice. She is taken off the bus and ends up at the police station. However, the media gets in on this unusual event. The next day, Sara’s act of defiance is headline news and soon sparks a rider boycott and an eventual overturning of the offending law that treats African American and white riders differently on public buses. Her actions are also a triumph for a child discovering the courage of her convictions.

Background
In 1955, when Rosa Parks refused to move to the back of a bus and give up her seat to a white man, racial segregation was the norm in southern states. The so-called Jim Crow laws kept African Americans and whites apart in almost all aspects of life. Separate entrances for public buildings, restrooms, drinking fountains, hospitals, restaurants, libraries, and places of worship were almost universal in the South. Only the year before (1954) had the U.S. Supreme Court struck down segregation in public schools with the landmark case Brown v. Board of Education of Topeka, Kansas. The Supreme Court had also ruled in November 1955 that segregation on interstate buses was illegal. However, the buses that most African Americans in Montgomery rode were owned by the city, and Rosa Parks’s action violated Montgomery law. After her arrest, the black community of Montgomery staged a boycott of city buses. The leader of this boycott was a young minister, the Reverend Martin Luther King, Jr. The boycott lasted more than a year, until on December 20, 1956, the Supreme Court declared bus segregation in Montgomery unconstitutional. For many people, Rosa Parks’s action was the beginning of the Civil Rights Movement in this country.

Before Reading
Prereading Focus Discussion and Questions
Before reading The Bus Ride with the class, you may wish to share the background material to help students understand the times and setting of the story. Then explore questions such as these with students.

Exploring the Book
Display the book cover. Read aloud the title and discuss the illustration. Ask students to talk about what the girl’s posture and expression convey to them. What might have happened on a bus ride that she took?

Setting a Purpose for Reading
Read aloud Rosa Parks’s introduction in the book, or let a student volunteer read it to the class. Ask students to read THE BUS RIDE to find out how this book relates to what Rosa Parks says in the introduction.

Vocabulary
Write the following words from the story on the chalkboard

Encourage students to volunteer other words they know that relate to the theme. Then ask students to make connections with the words and theme by creating sentences. For example, "A policeman helps to enforce the law."

Assign partners and tell students they will go on a vocabulary hunt. As students encounter each word in the book, have them try to use context to figure out the meaning. Have one partner write down what the team thinks the meaning is while the other partner looks up the word in a dictionary. Partners can then compare definitions and make adjustments to the one they wrote as needed. As a follow-up, ask students to choose two of the words to illustrate.

READING AND RESPONDING
Discussion Questions
After students have read the book, use these or similar questions to generate discussion and develop students’ understanding of the book and the historic events it represents. Encourage students to refer to passages or pages in the book to support or illustrate their responses.

Reader's Response
Use the following questions or similar ones to help students practice active reading and personalize what they have read. Suggest that students respond in reader’s journals, oral discussion, or drawings.

Other Writing Activities You may wish to have students participate in one or more of the following writing activities. Set aside time for students to share and discuss their work.

Art
Draw attention to the illustrations in the book. Ask students to trace Sara’s feelings during the story by examining the pictures. If students need help getting started, pose guiding questions such as:

Drama
Students can work together in groups to use body language to convey the attitudes of the characters at different moments in the story. Have students take turns showing (but not telling) what the attitude of the bus driver, Sara, Sara’s mother, and the sergeant are at different times. Ask the rest of the class to try to identify the character’s feelings and thinking. Then challenge students to act out the story in THE BUS RIDE without speaking any of the words.

About the Author andIllustrator
William Miller is the author of numerous award-winning books for young people. His first book, Zora Hurston and the Chinaberry Tree, a Reading Rainbow selection, was originally written as a poem. “I started out as a poet who wrote poems about famous African American writers,” says Miller. “My high school English teacher, who is also a children's book author, encouraged me to write a picture book based on my poems. I expanded a poem on Hurston's life and simplified the language for children.”

Miller was raised in Anniston, Alabama, and now lives in York, Pennsylvania, where he has taught African American literature for many years. His children’s books all relate to the African American experience and themes of struggle, renewal, and celebration. The Bus Ride, a “Choices” selection by the Cooperative Children’s Book Center, was praised by Kirkus Reviews for letting readers “feel the winds of history rustle.” Miller’s recent book, Joe Louis, My Champion,  tells the story of a young boy who learns to trust in his own natural abilities from the example of his hero, world champion prizefighter Joe Louis. Other award-winning books by Miller are listed below.

John Ward has illustrated many acclaimed children’s books, including Kente Colors, The Freedom Riddle, We Keep A Store, I Call It Sky, Families: Poems Celebrating The African American Experience, Poppa’s Itchy Christmas, and poppa’s new pants, winner of the Parents’ Choice Award. Ward studied at the School of Visual Arts in New York City. He lives with his wife in Freeport, New York.